Return to the Meet Our Team Page 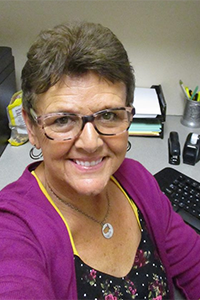 Carol was born and raised in Schuyler County. Carol married her husband Ron after High School and moved to the Cox Family Farm near Huntsville, Illinois where 51 years later they still reside.

They have 3 children, 6 grandchildren, and are expecting their first great grandchild in January, 2019.

Carol joined the Rushville Veterinary Clinic in 1998 where she began as a receptionist. In 2001 she was promoted to bookkeeper which is her current position.

Carol and Ron trained and raced Harness Horses from 1982 until 2017. This was something they both had a passion for and have many fond memories & success stories of a few of their favorite horses!

She also loves her flower gardens, and keeping their large lawn in tip top shape during the summer months. Her main hobby, which is also a source of income, is oil painting portraits of special pets.

Carol volunteers as director of the Children’s Church at Ellington Presbyterian Church where her husband is the pastor, and she also publishes the Church’s monthly newsletter.

And last, but not least, Carol and Ron share their home with two very special furry pals..*JOSIE* and *SWEETIE*. And YES, they are very spoiled!!!!

Visit our Online Store to buy products for your pets. We have a wide array of products you need, including food, flea and ticket treatment, pain meds, and supplements. You'll discover savings on the items you want from a trusted source!
Visit Store